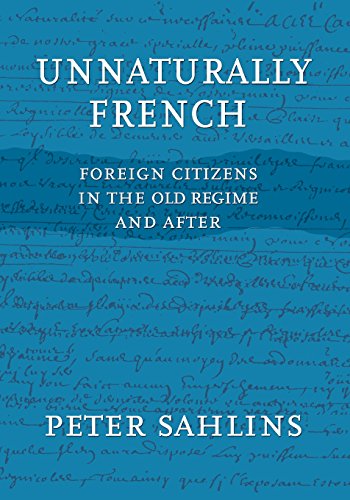 Unnaturally French: Foreign Citizens in the Old Regime and After por Peter Sahlins

Peter Sahlins con Unnaturally French: Foreign Citizens in the Old Regime and After

Críticas ""Unnaturally French is a long-awaited book by a major historian, the first to tell the complete history of French naturalization law and practice from the late Renaissance to the Restoration. Peter Sahlins makes a clear and sophisticated argument about the large-scale shift that took place in practices of naturalization in the eighteenth century: a shift, as Sahlins puts it, from law to politics. It is a tour de force of research and a fascinating, pathbreaking piece of analysis."" -- David Bell, The Johns Hopkins University ""This is a detailed, meticulous study that should shift the paradigms of the study of citizenship and nationality."" * Choice * ""This impressive book has important implications for the interpretation of the reign of Louis XIV, for legal and constitutional history, and for the ideas of the philosophes and the politics of the Revolution. By exploring neglected records of the droit d'aubaine and the old royal practice of naturalizing resident foreigners, Peter Sahlins provides a valuable new lens through which to view the powers and limits of absolute monarchy and the emergence of the public sphere. Unnaturally French is an important reconsideration of the stages in the invention of modern citizenship."" -- William Beik, Emory University ""This book, destined to be a classic, raises important questions on the nature of the absolute and revolutionary state and on the citizenship revolution that Sahlins dates to the 1750s. The contradictions inherent in the absolute state are illuminated in the jostling between fiscal imperatives and commercial interests and in the contest between international public law and private civil law.... Grounded in the archives, this magisterial work sits at the intersection of legal, social, and political history but does not neglect the international dimensions. This book will appeal to professional historians in a number of fields. Case studies from the archives enliven the book as clerics struggle for benefices, some of the Protestant diaspora seek inheritances, lawyers construct legal fictions, the desperate resort to lies, diplomats deal with the intended and unintended results of international agreements, kings assert their authority, and revolutionaries debate the meaning of citizenship."" -- Linda Frey, University of Montana * History * ""There can be no doubt that this is a book of major significance.... Wide in scope, thoroughly researched, brilliantly argued, and lucidly written, this work tells the story better than it has ever been told before and constitutes the most substantial integral history of early modern French naturalization and citizenship to date."" -- Thomas E. Kaiser, University of Arkansas at Little Rock * H-France * ""Mustering his considerable skills as a social, legal, and cultural historian, Peter Sahlins unearths the history of French naturalization to deliver a powerful interpretation of French citizenship from the Old Regime through the French Revolution and beyond. His account of the 'citizenship revolution' of the eighteenth century will fascinate not only students of modern France but also anyone interested in gaining historical perspective on contemporary issues of immigration, nationality, and citizenship. Unnaturally French is a gem of historical scholarship, exquisitely researched and carefully argued."" -- Michael Kwass, author of Privilege and the Politics of Taxation in Eighteenth-Century France ""Historians have, almost by definition, a fascination with transformations. Peter Sahlins is clearly no exception. Sahlin's superb new book on Old Regime France explores two related 'passages': one an alternation in personal identity regularly accomplished almost entirely through routine paperwork, the other a change in the relationship between subjects and the state that even the Revolution of 1789 could not fully secure. Together, he argues, these incommensurate transformations shaped what is meant to be French across the dividing line of the early modern and modern eras.... This book should become a standard work for students of French history and, indeed, for all historians concerned with how to write the history of immigration, foreignness, nationality, and citizenship before the age of passports, work permits, and border patrols."" -- Sophia Rosenfeld, University of Virginia * American Historical Review * Reseña del editor In his rich and learned new book about the naturalization of foreigners, Peter Sahlins offers an unusual and unexpected contribution to the histories of immigration, nationality, and citizenship in France and Europe. Through a study of foreign citizens, Sahlins discovers and documents a premodern world of legal citizenship, its juridical and administrative fictions, and its social practices. Telling the story of naturalization from the sixteenth to the early nineteenth centuries, Unnaturally French offers an original interpretation of the continuities and ruptures of absolutist and modern citizenship, in the process challenging the historiographical centrality of the French Revolution.Unnaturally French is a brilliant synthesis of social, legal, and political history. At its core are the tens of thousands of foreign citizens whose exhaustively researched social identities and geographic origins are presented here for the first time. Sahlins makes a signal contribution to the legal history of nationality in his comprehensive account of the theory, procedure, and practice of naturalization. In his political history of the making and unmaking of the French absolute monarchy, Sahlins considers the shifting policies toward immigrants, foreign citizens, and state membership.Sahlins argues that the absolute citizen, exemplified in Louis XIV's attempt to tax all foreigners in 1697, gave way to new practices in the middle of the eighteenth century. This ""citizenship revolution,"" long before 1789, produced changes in private and in political culture that led to the abolition of the distinction between foreigners and citizens. Sahlins shows how the Enlightenment and the political failure of the monarchy in France laid the foundations for the development of an exclusively political citizen, in opposition to the absolute citizen who had been above all a legal subject. The author completes his original book with a study of naturalization under Napoleon and the Bourbon Restoration. Tracing the twisted history of the foreign citizen from the Old Regime to the New, Sahlins sheds light on the continuities and ruptures of the revolutionary process, and also its consequences. Ver Descripción del producto