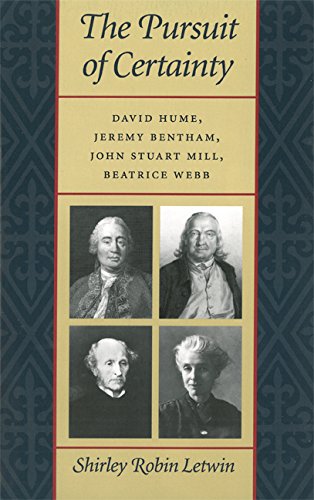 By examining the thought of four seminal thinkers, Shirley Robin Letwin in The Pursuit of Certainty provides a brilliant record of the gradual change in the English-speaking peoples’ understanding of “what sort of activity politics is.” As Letwin writes, “the distinctive political issue since the eighteenth century has been whether government should do more or less.” Nor, as many historians argue, did this issue arise because of the Industrial Revolution or “new social conditions [that] aggravated the problem of poverty” but, Letwin believes, because of the “profoundly personal reflection” of major thinkers, including Hume, Bentham, Mill, and Webb. David Hume, for example, believed that to “reach for perfection, to seek an ideal, is noble, but dangerous, and is therefore an activity that individuals or voluntary groups may pursue, but governments certainly should not.”

By the end of the nineteenth century, as Letwin observes, Beatrice Webb came to “equate the triumph of reason over passion with the rule of science over human life.” Thus did the “pursuit of certainty” displace the traditional English understanding of the limitations of human nature—hence the necessity of limits to governmental power and programs. Consequently, in our time, “Politics was no longer one of several human activities and at that not a very noble one; it encompassed all of human life” in quest of philosophical “certainty” and social perfection. The Liberty Fund edition is a reprint of the original work published by Oxford in 1965.

Shirley Robin Letwin (1924–1993) was a Professor of Political and Legal Philosophy at Harvard, Cambridge, and the London School of Economics.

Please note: This title is available as an ebook for purchase on Amazon, Barnes and Noble, and iTunes.