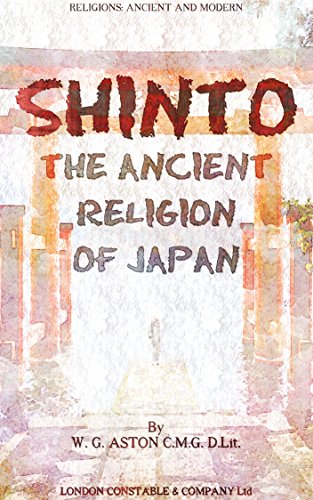 Origins.—The Japanese are in the main a continental race. Their language and physical characteristics show conclusively that they come from Northern Asia, and geographical considerations indicate that Korea must have been their point of embarkation. Indeed a desultory emigration from Korea to Japan continued into historical times. When we say Northern Asia we exclude China. The racial affinity of the Japanese to the Chinese, of which we hear so often, really amounts to very little. It is not closer than that which unites the most distantly related members of the Indo-European family of nations. The Japanese themselves have no traditions of their origin, and it is now impossible to say what form of religion was professed by the earliest immigrants. No inference can be drawn from the circumstance that Sun-worship is common to them with many North-Asiatic races. The Sun is, or has been, worshipped almost everywhere. There is distinct evidence of a Korean element in Shinto, but, with the little that we know of the old native religion of that country, anything like a complete comparison is impossible. Some have recognised a resemblance between Shinto and the old state religion of China, and it is true that both consist largely of Nature-worship. But the two cults differ widely. The Japanese do not recognise Tien (Heaven), the chief Nature-deity of the Chinese, nor have they anything to correspond to their Shangti—a more personal ruler of the universe. The Sun is masculine in China, feminine in Japan. The Sun-goddess takes precedence of the Earth-god in Japan, while in China Heaven and Earth rank above the Sun and Moon. Some Chinese traits are to be found in the old Shinto documents, but they are of later origin, and are readily distinguishable from the native element. A few similarities exist between Shinto and the religion of the Ainus of Yezo, a savage race which once occupied the main island of Japan. But it is reasonable to suppose that in this case the less civilised nation has borrowed from its more civilised neighbour and conqueror rather than vice versa. It is significant that the Ainu words for God, prayer, and offering, are taken from the Japanese. If the Malay or Polynesian element, which some have recognised in the Japanese race, has any existence, it has left no trace in religion. Such coincidences as may be noted between Shinto and oceanic religions, myths and practices are attributable to the like action of common causes rather than to inter-communication. The old Shinto owes little to any outside source. It is, on the whole, an independent development of Japanese thought.

Sources of Information.—The Japanese had no writing until the introduction of Chinese learning from Korea early in the fifth century of our era, and the first books which have come down to us date from the beginning of the eighth. One of these, called the Kojiki (712) is said to have been taken down from the lips of a man whose memory was well stored with the old myths and traditions of his country. He was perhaps one of the guild of ‘reciters,’ whose business it was to recite ‘ancient words’ at the ceremony which corresponds to our coronation. The Kojiki is a repertory of the old myths and legends, and, in the latter part, of the ancient history of Japan. The Nihongi, a work of similar scope, though based more on an existing written literature, was produced a few years later (720). It quotes numerous variants of the religious myths current at this time. There are voluminous and most learned commentaries on these two works written by Motoöri and Hirata in the eighteenth and nineteenth centuries. For the ritual of Shinto our chief source of information is the Yengishiki, a compilation made early in the tenth century.

To be continue in this ebook...